As we enter the weekend of International Sherry Week, I continued the festivities last night by taking a step outside the city of Jerez to enjoy a Manzanilla from the town of Sanlúcar de Barrameda.  Sherry can only be made in the the so-called ‘sherry triangle’, comprising the towns of Jerez de la Frontera, Sanlúcar de Barrameda and El Puerto de Santa María, in the southwestern tip of Spain.  A legal designation is given to these wines and it is protected in the same way as Champagne.

The ‘Sherry-Triangle’ in the southwestern corner of the Cadiz province, Andalucía

However, within the sherry triangle, Manzanilla has its own designation and can only be produced in the town of Sanlúcar.  In every way Manzanilla is the seperated-at-birth twin of the Finos I discussed earlier in the week.  The same palomino grapes, from the same vineyard areas, are vinified and fortified in the same manner as those destined to be Fino.

The key difference is the location of the ageing cellars and bodegas.  The sherry houses of Jerez, 25km inland, experience extreme summers which can see the flor thin or even die off in the heat.  The town of Sanlúcar, located on the Atlantic coast catches more moderating oceanic breezes.  In this cooler environment a thicker, more stable layer of flor develops on the surface of the wine, protecting it from oxidative effects, producing the lightest, freshest style of sherry.  The name ‘manzanilla’ means little apple, which is a local name for a fresh fragrant chamomile tea; these are two of the more common flavours found in these wines.

The La Goya Manzanilla above comes from one of the oldest bodegas in Sanlúcar; Delgado Zuleta.  It’s a light straw colour in the glass, with typical green apple and chamomile notes on the nose, supported by a mild yeasty and almond character.  It is light, fresh and bone-dry on the palate.  Lemons, green apples and chamomile are married with a lovely light touch of bread dough before a long finish that brings forward a touch of pleasant salinity.

Availability: Imported by the Spanish wine specialists, Vinos Tito, and is available in most good independent wine shops at about €11/37.5cl bottle.

The Irish Wino’s Verdict: This wine is aged slightly longer than the minimum required, so gets lovely complex notes.  Offers terrific value for money and is the perfect accompaniment to fish and chips or sushi.

To celebrate the official start of Sherry Week last night I enjoyed another glass of Palomino fino.  Again it was from bodega González Byass, and once again it goes by the name Tio Pepe.  In fact it even comes from some of the same barrels as the wine I reviewed yesterday.  But before you stop reading and worry that I’ve been celebrating sherry week with a little too much ‘enthusiasm’ there is one key difference; indicated by the words ‘En Rama’ on the label.

Translating as ‘raw’ this essentially means that the wine is bottled with minimal filtration and clarification.  Most finos are heavily filtered to remove any bits of yeast and sediments that build up in the barrels, giving a light floral wine.  But this process also strips away some of the raw flavour.  Fino En Rama  receives only a light filtration, to remove the largest particles, before bottling.  It is as close as possible to tasting the wine straight out of the oak barrel without making a trip to Jerez (although I do highly recommend every budding sherry enthusiast make a pilgrimage to that city).

But there is more to the wine than simply saving on a bit of filter paper in the winery.  The wine for the En Rama bottling comes from carefully chosen casks of Palomino in the bodega.  As I mentioned yesterday, a layer of yeast (flor) grows on top of the wine inside the two-thirds full casks.  In some barrels the exact strains of yeasts present will differ slightly, providing subtle flavour nuances; in others the layer will grow faster and thicker, influencing the extent of oxidation.  Hence each barrel will have its own unique character and flavour profile.  As these casks are never completely emptied of their wines in any given bottling, the Master Blender will know which individual barrels tend to develop the more complex characteristics.

When the stocks are simply blended together for Tio Pepe, this variation is lost giving the end product a consistency from year to year; the better wines compensating for those that are less complex.  However, in the last 8-9 years there has been a trend among sherry bodegas to keep back the very best wines from carefully selected casks and release this superior quality wine in its raw form.  Now the release of the En Rama wines are some of the most eagerly anticipated events in the sherry-lover’s calendar.

So, what’s the difference I hear you ask?  Well, firstly the price; the En Rama version is about twice the price of the regular Tio Pepe.  But it is also fantastically more complex than the regular wine.  In a side-by-side comparison the En Rama version is like the Tio Pepe on steroids.  In the glass it is a much deeper gold (unsurprising as it is not as heavily filtered).  All of those lovely almond and mealy green apples on the nose are still there, but amplified and exaggerated.  The soft floral and chamomile character of the regular Tio Pepe is relegated, whilst the yeasty bread note comes to the fore.  On the palate it has a richer mouth feel and the almonds are joined with hazelnuts and a pleasant salinity on the long finish.  But despite this fuller form of Tio Pepe there is no denying its origin, boasting an elegance that begs for another glass; it is beautifully balanced and is the perfect accompaniment to a meatier fish plate or sushi.

Availability: Alas this is not an easy wine to find, but most good independent wine shops will stock at least one brand of fino En Rama.  The excellent Lustau Fino En Rama  is on special in Mitchell and Sons during Sherry week and The Corkscrew on Chatham St usually have some stock.

These wines tend to be released twice each year- in Spring* and Autumn- and as they are not stabilised through filtration should be drunk young.

The Irish Wino’s Verdict: This is a wonderful and complex wine.  Although more expensive than the regular Tio Pepe, the En Rama is a very different beast and should be seen as the premium product that it is.  For the very limited production available it still offers very good value for money and well worth hunting down.

* The wine I reviewed was the Spring 2016 bottling. 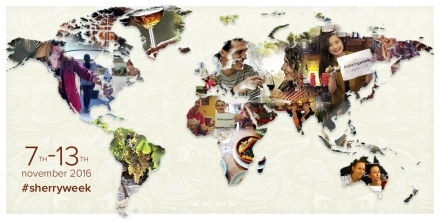 Today sees the start of Sherry Week- a global celebration of that most underrated (in Ireland at least) and quintessentially Spanish wine; showcasing the history, culture and creation of sherry.  Once Spain’s most important wine export, sherry is in the middle of a true renaissance.  If you think it’s purely the preserve of elderly female Downton Abbey characters, take another look at the wine lists of some of the trendiest restaurants across the globe, where a good sherry offering is essential.  And it’s no surprise, as these are hugely versatile, food-friendly wines.

If you want to get involved in sherry week, find a full offering of events in Ireland over on The Vine Inspiration blog, run by the passionate and knowledgeable sherry educator, Paddy Murphy. For those of you not on The Emerald Isle, you can get a comprehensive list of events in your area on the Sherry Week website.

One event that everyone can join is the online tasting with the Master Blender of González Byass, Antonio Flores.  On Thursday 10th November he will be giving a tutored tasting of Tio Pepe.  Find details here.  Last night I started celebrations early with a bottle of this delicious fino. 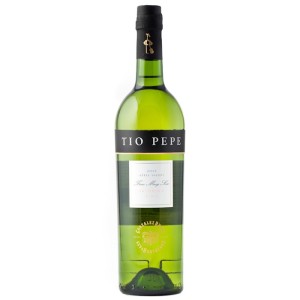 Being on the market since the mid-19th century, even confirmed sherry lovers often overlook this wine in favour of more fashionable brands.  However, it remains one of the best-value mass produced wines of the world.

As with all sherry finos, the Palomino grapes for this wine come from the vineyards around the city of Jerez in the south west corner of Andalucía in Spain. Only the finest first press grape juice (must) is used, from which this style of sherry gets its name (fino= fine in Spanish).  The must is fermented like any other wine before the addition of alcohol to bring it to 15% abv.  This fortified wine is then aged for an average of four years in large old oak casks that are two-thirds filled.  During this time a layer of yeast (flor) grows on top of the wine, protecting it from too much oxidation and preserving its freshness.

A two-thirds filled cask of Palomino Fino under its protective layer of flor, Bodegas Lustau, Jerez

This wine could not be further from the perceived sweet and cloying reputation sherry has attracted.  It is light, floral and bone dry.  On the nose it is full of aged green apple, chamomile and an attractive almond and bready note.  In the mouth it is crisp, fresh, dry and balanced, offering up those promised green apples and almonds.  The alcohol (15-15.5%) is well balanced and gives it a lovely warming touch on the long finish that offers a touch of saline minerality.

This wine should be served well chilled and is perfect as an aperitif or with fresh shellfish.  Once opened keep in the fridge and drink within a week.  Tio Pepe is available from most off-licences, supermarkets and wine shops for around €16 for 750ml.

The Irish Wino’s Verdict: This is not the most serious or complex sherry I will try this week, but it is fabulously consistent, excellent value and tremendously food-friendly.

The Irish Wino’s Tip: This wine should be drunk young and fresh, so check the back label for the bottling date.  If it was bottled over a year ago, leave it on the shelf.  Independent wine shops and better off-licences should have younger, fresher stock.

With the deepening evenings looming over us, October and November offer some great wine events to cheer up even the most passionate Bacchant!

Rhône Wine Week runs from 2nd-8th November, with some terrific events around the country. Check out the full schedule on their website or Jean Smullen’s Wine Diary. The highlight of the week is the Ely Big Rhône tasting; read about last year’s mayhem over at Frankly Wines.

For the Iberophiles amongst you, lamenting the end of the World Tapas Day celebrations, fret not; there are two terrific events to brighten up your gloomy November evenings. First up is International Sherry Week, where Dublin celebrations are centred on Stanley’s Wine bar. For the full list of events, get yourself over to recently-qualified sherry educator Paddy Murphy’s Vineinspiration.

Then on Wednesday 11thNovember Spain Uncorked offers the exciting opportunity to try some of the best wines Spain has to offer, in the fabulous surrounds of the Smock Alley theatre in Dublin city. Over 40 bodegas will represent the wines of Ribera del Duero and Rueda. Although geographically close, these two regions offer contrasting styles. The brooding, powerful Tempranillo reds from the former; crisp, refreshing Verdejo whites from the latter. Ribera del Duero was the first wine region I visited (read here) and remains one of my favourite wine styles, so don’t miss this wonderful event. Limited amount of tickets still available at Eventbrite.